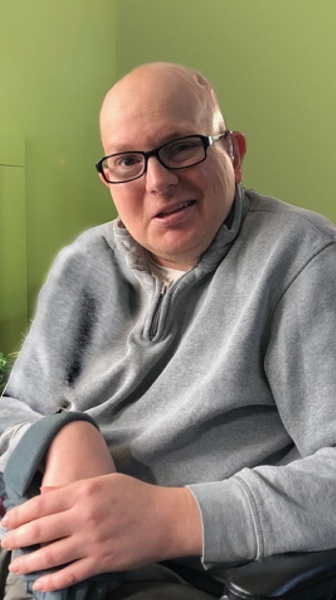 Tayno V. "Vic" Hyden III, age 50, of Carlisle, formerly of Stow, passed away peacefully on Wednesday, May 27, 2020, from complications due to radiation treatment to treat a brain tumor in his early teens.

Born in Concord, Massachusetts on May 24, 1970, he was the son of Frances E. (Martin) Hyden and the late Tayno V. Hyden Jr. Vic was raised and educated in Stow, and graduated from Minuteman High School, class of 1988. He completed a certificate program in baking at Newbury College. He was a member of Boy Scout Troop 1 of Stow and followed the Troop with interest as an alumnus.

Vic worked at Country Fare Star in Stow for many years, where he was a customer favorite. He also worked at Staples in Framingham and Cambridge for ten years, until 2006.

Vic had an infectious, winning smile, a quick wit and a gentle, kind demeanor. He cherished his family. He loved spending time with his mom, sisters and extended family, especially if it involved a trip to a diner for pancakes. He loved baking and sharing his creations with pride. Vic was a great bowler and competed in the leagues at Crowell Bowl in Stow for many years. He enjoyed music, especially classic rock and the blues, and was an avid reader with a keen interest in military history. Vic loved fishing with his family, along the Cape Cod Canal and at small ponds in Stow. No one wore a Boston sports team hat better than Vic. A man for all seasons, he was a fan of the Patriots, Bruins and Red Sox.

Since 2006, Vic faced a prolonged period of health challenges with dignity, optimism, humor and gratitude. He tackled each rehabilitation bravely and with unwavering effort. His family is grateful to those who cared for him, including the team at the Neuro Rehab in Worcester, where he resided for many years, and especially for the wonderful care team and his fellow residents at his group home in Carlisle, where the last few years of his life were happily spent enriched by their compassion and friendship.

He is lovingly survived by his mother, Frances E. Hyden of Stow; his devoted sisters, Danielle E. Hyden of Stow and her partner Ryan Whitcomb; Mandy O. Hyden and husband Dylan Burrows of Maynard; his beloved grandmother, Gertrude E. Hyden of Acton; and will be fondly remembered by an extended family of uncles, aunts and cousins. In addition to his father, he is predeceased by his paternal grandfather, Tayno V. Hyden, and his maternal grandparents, Richard N. and Rosemary E. Martin.

If you wish to make a donation in Vic's name, contributions to the Brain Injury Association of MA are appreciated. Please visit biama.org.