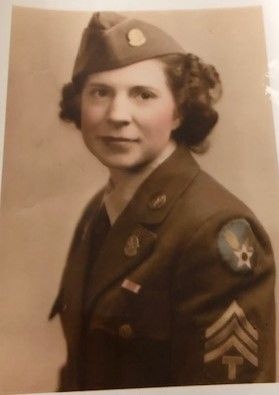 Born in Maynard, Massachusetts, February 2, 1918, she was the daughter of the late Lewis and Gladys Mae (Bamford) Cuttell. Ruth was a long time Maynard resident. On January 7, 1943 at the age of twenty-five, Ruth enlisted in United States Army Air Corp and proudly served her country during WWII.

Ruth was a member of the American Legion Post #235 in Maynard, serving as past president and on the Auxiliary Unit. She was also a member of Women's Army Corps Veterans Association chapter 14 in Boston. Ruth enjoyed volunteering at the Maynard public library and at the Veterans Hospital in Bedford, MA.

Ruth is survived by her three children, three grandchildren and two great grandchildren. Ruth was predeceased by her brothers Wilson Cuttell and Harold Cuttell.

Per Ruth's request, services are private.