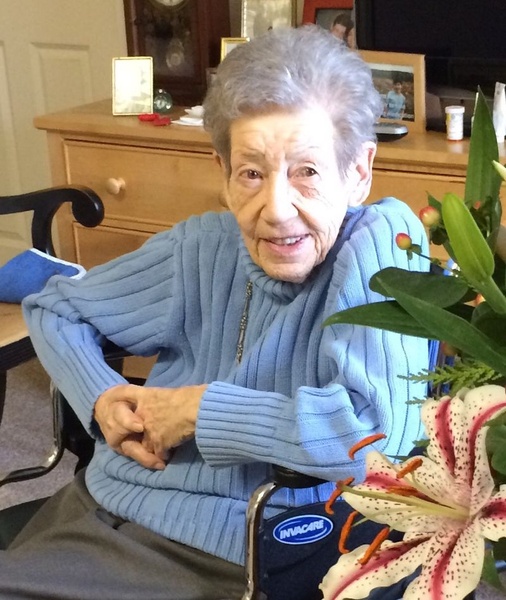 Ruth A. Burke age 94 of Ayer, formerly of Maynard, passed away on February 12, 2017 at Nashoba Park Assisted Living.

Born in Maynard on September 7, 1922, Ruth was the daughter of the late Albert N. Hodgess and Matilda (Marsden) Hodgess. She was predeceased by her siblings Myrtle (Hodgess) Whitney, formerly of Pittsfield, VT and Albert J. Hodgess, formerly of Maynard.

Ruth grew up in Maynard and attended Maynard public schools. She received her degree in Home Economics from Massachusetts State College (UMass) in 1944.

Ruth subsequently moved to New York where she met and married her beloved husband Robert Percy Burke, formerly of Montpelier, VT. She worked as a home economist for Lever Bros until 1958. After her husband passed on in 1965, she moved back to Maynard with her son David. Ruth then began teaching Home Economics at Maynard Junior High School, where she taught until her retirement in 1987.
In 2006 Ruth moved to Nashoba Park in Ayer and was recently honored as one of the original residents at "the Park's" 10th Anniversary celebration.

The most important thing in Ruth's life was her family. She enjoyed the family gatherings and spending time at York Beach, ME and Pittsfield, VT. She was an avid reader and enjoyed knitting, arts & crafts, and shoe shopping.

She was a member of United Methodist Church in Maynard.

She is survived by her loving son David J. Burke and his wife Laura Chu Burke of Bolton, her devoted grandchildren Steven P. Fadden and his wife Shari Rosenzweig of San Francisco, and Karen Fadden Fabbri and her husband Gian Fabbri and her great grandchildren A.J. and Alexandra Fabbri of Beacon Hill. Ruth is also survived by many nieces and nephews, along with many grand- and great-grand-nieces and nephews.
A special thanks to the staff, nurses and assistants of both Nashoba Park and Nashoba Nursing for taking such good care of mom for the past several years.

Family and friends will gather to honor and remember Ruth on February 19, 2017 from 10:00 a.m. - 12:00 p.m. at the Fowler-Kennedy Funeral Home, 42 Concord Street, Maynard followed by a burial at Glenwood Cemetery, Maynard

In lieu of flowers, please donate to the charity of your choice.