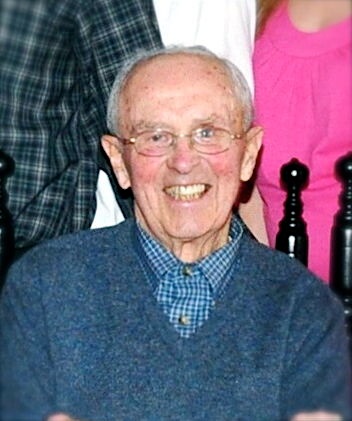 Born in Concord, Massachusetts on January 27, 1931, he was the son of the late Waino and Aune (Savikoski) Ojalehto. Raised and educated in Maynard, Bob graduated from Maynard High School, class of 1949. Upon graduation, Bob attended Boston University and graduated with a Bachelor's degree in Business. Bob worked as a Sales Representative for Gates Energy for over fifteen years. In retirement he worked at the Outdoor Store in his hometown of Maynard. He also enjoyed working at Butternut Farm Golf Club maintaining the grounds.

Bob and Gert married on July 4, 1953 and settled in Maynard where they raised their family. The couple enjoyed traveling together especially to the coast of Maine. Family was important to Bob. He loved spending time with his grandchildren. Bob was a self-proclaimed "Rink Rat", skating and playing hockey most of his life. He had a passion for teaching kids in Maynard how to skate and he really enjoyed coaching hockey. Bob was an outdoorsman and in addition to skating and hockey, he enjoyed hiking, canoeing and golfing. He also loved the Bruins.

Family and friends will gather to honor and remember Bob on Wednesday May 24, 2017 at 11:00 a.m. in Glenwood Cemetery, Maynard for his graveside service.

Gifts in his name may be made to the Alzheimer's Association, Chapter Headquarters, 309 Waverley Oaks Rd., Waltham, MA 02452