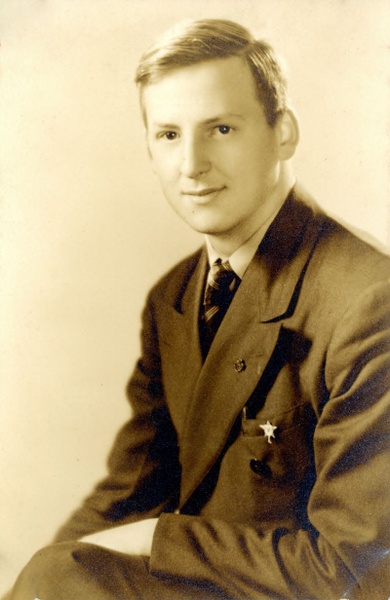 Robert B. "Bob" Meister, age, 94, of Maynard, passed away peacefully on Wednesday January 10, 2018. He was the loving husband of Taj (Gulab) Meister.

Born in Lawrence, Massachusetts on December 24, 1923, he was the son of the late Benjamin and Gertrude (Duemmling) Meister. Bob moved to Maynard in 1933 and graduated from Maynard High School, class of 1941. Bob received his B.S in Textile Chemistry from Lowell Textile Institute (now UMass Lowell) and his degree in Poultry Husbandry from Stockbridge School of Agriculture graduating with honors from both schools and a member of the ATG Fraternity. Bob was drafted by the United States Army in 1943 and served in World War II in the signal service battalion until 1946.

After discharge from the military and completion of his education, Bob felt called into missionary work in India. He took the initiative by self-funding his missionary work and would eventually join The United Methodist Church mission years later. After 2 years of service he was thrown out by the Indian government which led him to Pakistan where he served for 33 years. While in missionary service he worked using his poultry background to educate and train in poultry farming. He also worked supervising building construction projects including schools and hospitals in different parts of the country, visiting prisons for prison ministry, ministering to all his workers and caring for the Pakistani people.

Bob met the love of his life, Taj, in 1960, at a Missionary Conference, and they married thirteen years later. Bob and Taj remained in Pakistan working as missionaries with their two daughters until his retirement in 1985, when the family came back to the United States and settled in Maynard.

Bob had a love for reading the Bible, educational, scientific, and informative books and articles. He was the highest admirer of his wife's cooking and enjoyed desserts from his German roots.

He is survived by his wife, Taj Meister of Maynard, MA; his children Theresa and husband Rob Marlar of Holliston, MA; Lisa and husband Neil Rondina of Georgia; his beloved grandchildren Claire, Calvin, Henry and Miles; and brother Bernard Meister of Michigan. Bob was predeceased by his brothers Kenneth and Roland Meister and sister Patricia (Meister) Crouse.

In lieu of flowers, donations can be made to ongoing work in Pakistan through organizations such as: http://onetoanother.org.pk

Donations can be made here: https://www.aplos.com/aws/give/EarthMissionInc/OnetoAnotherDonation