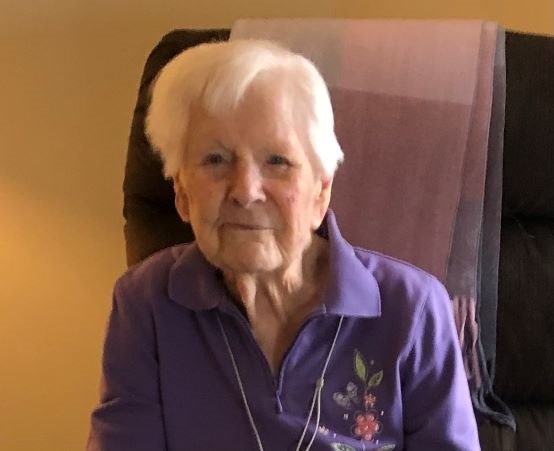 Rita M. (Callahan) Sharkey, age 95 of Kennebunk, Maine, formerly of Stow, Massachusetts passed away peacefully on Friday, June 10, 2022.  She was the loving wife of the late Frederick J. Sharkey Jr.

Rita was born in Cambridge, Massachusetts on August 10, 1926, the daughter of the late Charles F. and Elizabeth (Kelly) Callahan.  She was raised and educated in Cambridge. After an early career in the U.S. defense industry, including being the first female assembly technician in the Raytheon Hawk Missile Program, Rita retired to become a homemaker after the birth of her two daughters.

The Sharkey family moved to Stow in 1955 where they resided for 65 years. Rita was a daily volunteer at the Stow Council on Aging for 15 years receiving awards from both the town and the State of Massachusetts for her service. Rita enjoyed dancing with her husband Fred, was an addicted gameshow follower, and an avid reader later in life accumulating her own personal library. Rita spent her last three years close to her sons in Maine.

Rita is predeceased but her husband Frederick, son George Sharkey, and her siblings, Charles, Walter, Harold and Barbara.

Rita is survived by her children, Wayne Sharkey and wife Christina of Kennebunk, ME; Kathleen Campos of South Portland, ME; Judy Zola and husband Tom of Rindge, NH; her grandchildren, Ryan, Justin, and Alex Sharkey, Paul Campos Jr., and Connor Zola; her great grandchildren, Elliot, Julian, and Olivia Sharkey; her daughter-in-law Beth Boland-Sharkey of Saco, ME.

The family would like to thank the wonderful staff of Huntington Commons, Kennebunk ME and the nurses, social workers, and chaplains of Northern Lights Hospice for their exceptional kindness and loving care of Rita at the end of her life