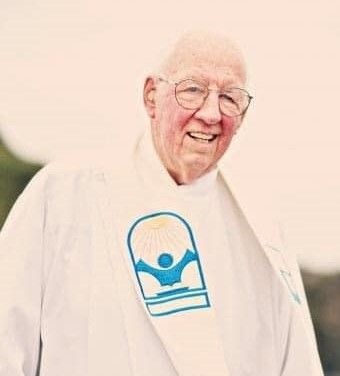 Our dad died having left his mark on the world and the hearts of many.

Rev. Dr. Richard E. Harding (June 16, 1926-May 16, 2020) originally of East Boston spent his career as a devoted and admired United Methodist Church minister in Kentucky, Chicago and across Massachusetts. Although a distinguished graduate of Union College (where he met wife Shirley) and Boston University School of Theology, his greatest learnings in life were from the people he met and the places he loved, including Newfoundland Canada - a second home that stole his heart, and Botswana where he served as a missionary pastor for a year in 1991 in his retirement.

If you had the pleasure of knowing him, you know he was fascinated by people and their stories. A storyteller himself, he would often enamor you with his own adventures and perspectives on the world. He was an educated and travelled man, but he was most impressed by a strong character and a good sense of humor, no matter your background or stature.

He was a minister, a humanitarian, and an activist. He was passionate about politics, human rights and community. He would get lost in conversations, he would challenge you, and he was goofy (insert Donald Duck voice here!).

He was intensely present, full of life, and at almost 94 years, it's fair to say his was a life well lived. He soaked up the small things and rallied for the big things that mattered (even his yearly Christmas letter could be mistaken for political satire).

He was active in the Civil Rights and anti-war movements and supported gay marriage as one of the founders of the Reconciling Retired Clergy of New England Conference of the United Methodist Church and an active member of the Religious Coalition of the Freedom to Marry in Massachusetts.

More than his many accomplishments and accolades though, he was most proud of his family. He is survived by his wife Shirley Harding (Harrington) of 72 years; children Elaine (Tom), Richard (Beth), Sue (Gord), and Leslie (Ed); seven cherished grandchildren Christine, Gordie, Josh, Ashley, Corey, Sara, and Jason; and four beautiful great-grandchildren Zachary, Ronnie, Shelby and Leila. He is predeceased by sister Peg, and sons James and John.

He was the epitome of grace, humility and patience. He served in every sense of the word and we shall miss him and honor him in our memory every day.

A celebration of life will take place at a later date, post COVID-19. In lieu of flowers, donations can be made in his honor to a charity of choice.