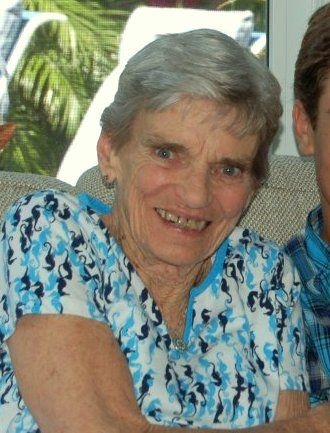 Born on April 30, 1934 in Weston, MA, she was the daughter of the late Donald and Helen (Lyons) Mason. Raised and educated in Weston, Sis graduated from Weston High School in 1953. Throughout her high school years, she enjoyed playing field hockey and basketball for Weston High School. She was also very proud to have been active in the Girl Scouts until the age of 18. She married Robert Ashworth in 1961, and they raised their 3 children in Newton, MA. In 1988, Sis married her second husband Eugene Glass and they enjoyed many happy years together.

Sis worked for 20 years in the Accounting Department of Brae Burn Country Club in West Newton, MA. While working at Brae Burn, she was fortunate to have made many special and lasting friendships; including her dear friends Alf and Kitty O'Riordan, with whom Sis and Gene traveled to Ireland for a wonderful, and memorable, vacation. In 2001, Sis retired, and soon after she and Gene relocated to Dunedin, Florida. Sis was an avid sports fan and enjoyed following the Red Sox, Patriots, Bruins, and Celtics. She enjoyed spending time with her family, especially her grandchildren and great-grandchildren. While living in Dunedin, she enjoyed the time she spent with her friends at Lake Highlander; the community in which she lived. She also enjoyed playing golf, attending Sunday service at the First United Methodist Church, going out to eat with her husband and friends, reading, and spending time at the beach. Her beloved cat Sadie was a great source of comfort to her.

A private funeral will be held at a later date.

Donations in her memory may be made to:
American Cancer Society
30 Speen Street
Framingham, MA 01701