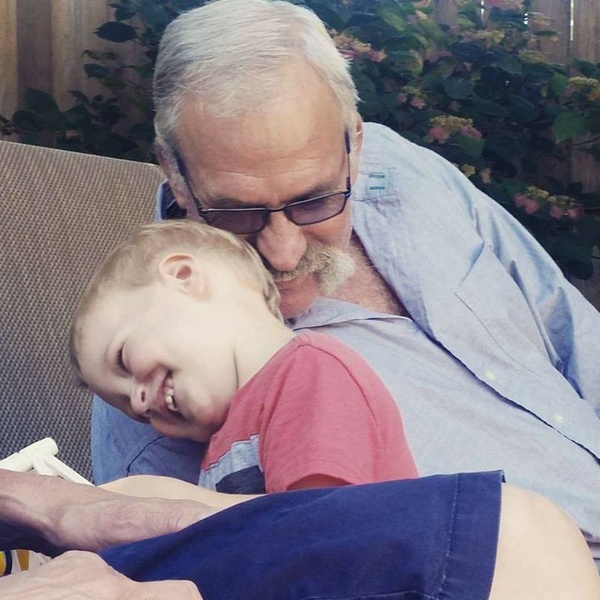 Born in Modesto, California on January 1, 1959, Loren was the son of Raymond E. Stuit and Joan (Stap) Stuit. Formerly in construction, he has been enjoying retirement for the last number of years.

Loren moved to Maynard from Elk Grove to spend more time with his grandchildren, Owen and Isla. He was a great "Papa" and loved them with all of his heart. Loren had a passion for Harley Davidson Motorcycles - he enjoyed riding and maintaining his bike. He also enjoyed working with his hands doing woodwork, fishing, and landscaping at his daughter's house, and Yosemite National Park was his favorite place in all the world (he hoped to visit there again with his family).

Our family's story is a unique one – as I'm sure all are. I feel my father's story shares the love he has for his family more than anything, which is why I want to share it with you.

I was raised in a family of three, an only child. My dad loved me more than anything. I have always known that. I still remember a day in college when I called him panicking about a flat tire. He told me not to worry, he would be there in three hours. I reminded him that was silly, and he should just tell me how to fix it! That was just his way, though; he would drop anything for someone important to him. He had the biggest heart I know.

My parents loved each other lots, but they had some rough times together, and ultimately they wound up twice married and twice divorced. Through all of their trials with each other they yet managed to remain close, however, and they always made sure that I knew we were still a family. They never lost connection, and I never had to choose.

In 2007, with my own family just beginning to grow, Scott and I moved to Massachusetts. At one point my parents moved to North Carolina to be closer—they figured that at least they would be on the same coast as us! They were still married then. Those plans did not turn out as they wanted, though, so back to CA they went. Finally, when we had our first child Owen, and after their second separation, my mom moved out here to be with us (she thought temporarily at the time – little did she know). We ended up having a second child, Isla, buying a house, and making a spot for ourselves in a wonderful community. For the first few years, my dad would come visit for a minimum of four to five weeks at time, at least once a year. A month is a long time to crash on the couch, but we all made it work. At one point, though, my dad decided that he wanted more. He felt like he was missing out on too much. He wanted to see the kids grow up, and he wanted them to really know their grandpa.

Finally, this past October, he decided to make the trip out here permanently. After some last minute deliberation on logistics, he and my 80+-year-old grandfather embarked on a cross-country drive in a U-Haul, pick-up truck and Harley both in tow. Although an apartment might have been easier, my father has always been a "house" guy, and he figured that our house would be the closest and best place to see the kids. So he moved right on in!

It was a little rocky at times figuring out where and how things would work. My divorced parents, two toddlers, my husband, and I were all living under one roof—sometimes the whole thing felt like it was made for reality TV! But we wanted everyone to feel comfortable at home and like a part of the household. My parents also wanted to contribute, to do the most they could to help raise a now two and three-year-old (takes a village). We all hoped it could work. And it took a while to find it, but the house finally started to fall into a rhythm that did work for all of its members, and the kids always especially loved the arrangement.

For over six months my dad lived in a room that I called the "fort." It was a temporary space in the basement that had no windows and little air circulation. It was not a comfortable room at all, but he made it as cozy as he could, and stuck it out until we could gather time and money to convert our little one-car garage into a new bedroom, one that would even come with its own half-bath! When he passed this last Monday, construction was just two weeks away from completion, and he had a long list of summer projects to keep him busy out in the yard. He would have been so happy with it all.

His last moments were with his grandchildren at the town carnival. His grandchildren were his world. Although my parents parted ways twice, he ended his last year back at "home," together with all of us, part of a delightfully different family of six. We were able to be with him, hold him, love him. He was loved, and gave so much love back. Life took him away from family at times, but in the end family is what he came back to.


In lieu of flowers or gifts, donations will be accepted through the Maynard Education Foundation. Loren loved his grandchildren and would feel proud being able to contribute to their education.


Loren loved Yosemite National Park. To help preserve the park and future visits to it, people can donate to Yosemite Conservancy.