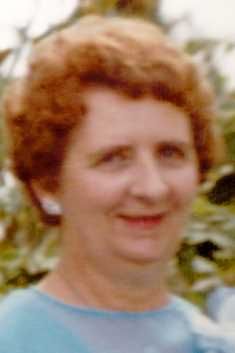 Laura H. (Stapell) Butler age 87 of Maynard and Acton passed away on Thursday, December 19, 2013 at New England Baptist Hospital in Boston, she was the wife of the late Horace (Bud) Butler.

Born in Maynard on March 19, 1926 she was the daughter of the late Matti and Hilda (Hepaniemi) Stapell who were immigrants from Finland.
Raised and educated in Maynard, Mrs. Butler graduated from Maynard High School in 1944. She married in 1946 and moved to Acton where together with her husband Bud raised their family. A devoted wife and mother Mrs. Butler enjoyed spending time with her family and friends. She also enjoyed ballroom dancing with her husband, reading and summers in Maine on Long Lake.

She is survived by her children David and wife Jeanne of Ipswich, Doris Blaisdell of Lunenburg, Lorraine Kaskiewicz and husband Mike of Stow, Michael and wife Mary Ann of Acton, John and wife Sandy, Joanne Butler and Mark Butler all of Bridgton, Maine. She was predeceased by daughter Sandra Butler and grandson Joseph Blaisdell. She is survived by many grandchildren and great-grandchildren. She was also predeceased by her brothers Hugo Stapell, Wayne Stapell, Walter Stapell, Wilho Stapell, Lauri Stapell and a sister Sylvia Stapell.

Visiting Hours will be held on Thursday December 26 from 6:00-8:00 pm in the Fowler-Kennedy Funeral Home, 42 Concord St., Maynard. Funeral Service Fri. Dec. 27 at 10:30 am in the funeral home. Interment will follow in St. Bridget Cemetery, Maynard.