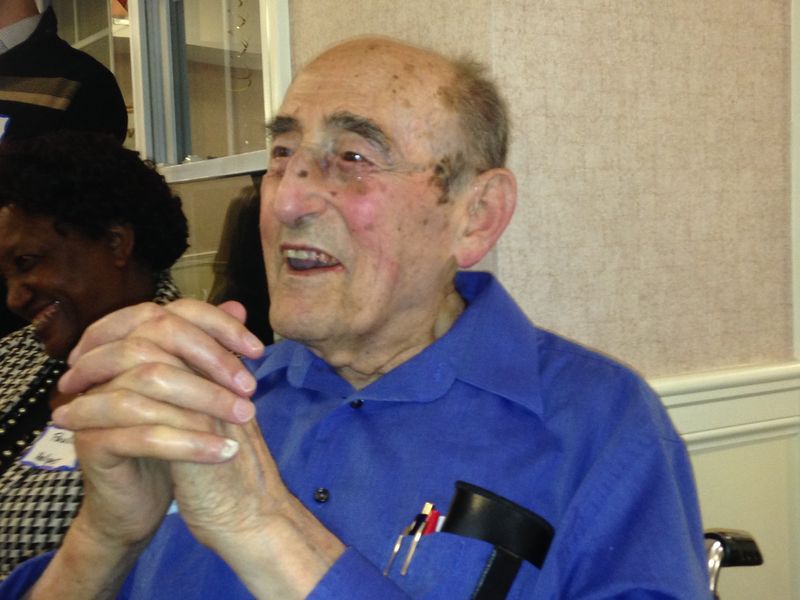 Ernest Goldman was born on December 2, 1913 in Vienna, Austria. He grew up in a village in Moravia, near the border with Bohemia, two kingdoms of the Austro-Hungarian Empire, which became part of Czechoslovakia in 1918. As a youth, he spoke both German and Czech; English was his fifth language, after Latin and French. When he was 15, his family moved to Vienna, where he lived for 10 years until emigrating to the U.S. in December, 1938. After the Nazis annexed Austria to the German Reich in March of that year, life became very difficult. As a Jew he was no longer able to pursue his studies in physics at the Institute of Technology (Technische Hochschule) in Vienna or his piano lessons, and he started to make plans for emigration.

Fortune was with Ernest in several ways:

First of all, because his mother knew that he would be a very large baby, she went to Vienna for the challenging delivery, so that she could give birth in a hospital under a doctor's care rather than at home with a midwife. Therefore, he was able to come to the US under the Austrian immigration quota, unlike his 3 siblings who were born in Czechoslovakia and whose best option was to flee to England and then to Australia.

Secondly, in November of '38, he luckily escaped arrest by the Nazis when a sympathetic SA officer warned him, along with others standing in a line, to go home because it would be "getting hot" for Jews later that day, so he went into hiding. It was the early morning of Kristallnacht (Night of Broken Glass) in Vienna, when the persecution of the Jews increased dramatically and many young Jewish men were arrested and sent away to destinations unknown.

Thirdly, he hid at the apartment of his fiancée, Marie. Her apartment building had 2 entrances, and that evening the Nazis only used the other entrance to round up the Jews in the building.

Marie and Ernest were married 3 days later, as soon as they felt it was safe enough to go out on the street. They hoped that by marrying sooner than they originally planned, they could help each other to expedite emigration, since he had an affidavit of support from a relative in the US and she worked at the American Embassy, where she was able to help facilitate the necessary paperwork. They always had a special place in their heart for their 2 Gentile friends who took risks to be the witnesses for their wedding in front of a Nazi judge.

It is a wonder that Ernest survived at all, as his parents, grandmother, and over 25 of his relatives perished under the Nazis. Most of these family members were not practicing but assimilated Jews, and Ernest had been raised as a Lutheran. However, under the Nazis, he was considered Jewish because he had at least 2 Jewish grandparents.

He continued his studies at NYU and completed his master's degree in physics, then had a 40-year career in engineering physics, working in research & development with semi-conductors. His deep interest in scientific fields and his fascination with numbers continued throughout his life.

Ernest lived in New York City until 1944, when he moved to Bloomfield, NJ, where he and Marie raised their 2 daughters, Helen and Bobbie. His mother-in-law was able to emigrate in 1940 and lived with them until her death in 1970. After being transferred by GTE to Waltham, Massachusetts in September, 1972, he and Marie moved to Stow, MA where he resided until his death.

Ernest started his piano studies before he was 7 years old and continued until 1938, when the Nazis occupied Austria. From 1929 to 1938, he studied with Mark Goldin, in a direct pedagogical line of teachers from Beethoven, separated from the great composer by only four generations. He maintained his passion and high level of accomplishment on the piano during the difficult early years in this country and throughout his career, although he decided not to pursue music as his profession. He would say, "Engineering was for food, but music was for the soul." He first worked as an engineer at Westinghouse (1942-53), then Tung-Sol Electric ('53-'64), General Precision ('64-'65), and finally GTE ('65 until his retirement in '83 at the age of 70).

From then on he devoted most of his efforts to the piano. He performed many piano concertos by Mozart, Beethoven and Brahms with local orchestras, primarily the Sounds of Stow orchestra, which featured him in a total of 26 piano concerto performances starting in 1986. He was proud of having performed all 22 original piano concertos of Mozart. He greatly enriched the musical community of Stow and surrounding towns in many ways. Frequently he would host evenings of dessert and music, where amateur musicians would be encouraged to share whatever they could without judgment.

In the late '70's, a few years after moving to Stow, he co-founded, along with Barbara Jones, the Sounds of Stow, a community music organization. He poured his heart into that, serving as orchestra manager, doing publicity, and sharing his love of sweets with all the musicians during rehearsal breaks. He continued to serve on the board until his death; the meetings even moved to his residence when he became homebound.

Over his lifetime he gave many hundreds of concerts: sometimes solo piano, other times chamber music or accompanied by an orchestra. Some were during the years of his career, but many more were after retirement. Performances were given in churches, schools, libraries, retirement homes and private homes, often as fundraising events for non-profit organizations. He also performed at MIT and the Cathedral Church of St. Paul in Boston.

Modest though he was, when asked he said he wanted to be remembered for playing the piano expressively and in line with the composer's presumed intentions. So many people were deeply moved and in awe of Ernest's playing and some would use the term transcendent or eternal to describe their experience of his music. (A recording of his can be heard by clicking on the "play" button. It is the first movement of Beethoven's Piano Sonata Number 31 Opus 110. To him that movement represented love of life and the beauty that life can be.)

As for family life, Ernest spent more than half of his 100 years married; first for 51 years to Marie Goldman, nee Black and later for 7 years to Doris Goldman, nee Charter. They each passed away at relatively young ages: Marie of cancer in 1990 at the age of 76 and Doris in 1999 at the age of 68 as a consequence of a serious car accident followed by an 8-month coma.

With Marie he had two daughters, Helen and Bobbie, and through Helen and her husband Jim Wright, two beloved grandsons, David and Paul. Through Doris, he gained 6 step-children, 16 step-grandchildren, and, as of now, 6 step-great-grandchildren. Doris's daughter, Meg Hill, shared a special bond with Ernest through music and her camp, Music at Port Milford, which was founded by her mother.

Ernest would remember everyone's birthday, and one step-granddaughter honestly thought he was the whole world's grandfather. He recently realized he was the longest-living person of all of his ancestors, and he knew all of the birth and death dates of everyone on his family tree for at least three generations before him - well over 50 people.

Ernest aged gracefully and nobly, choosing not to move into an over-55 community until he felt old enough. That was at the age of 96 and only came about after a bad fall and brain injury. He made a miraculous recovery and continued to be vital thanks in part to an excellent team of caregivers and visiting nurses, who were very devoted to him. He reached his 100th birthday in good health last month and enjoyed several large, meaningful celebrations in his honor.

Ernest was a remarkable combination of physicist and concert pianist, as well as a man of great dignity, intellectual curiosity, and kindness, who embraced the fullness of life throughout his many years. Until his last few days, he still exercised on his recumbent stationary bicycle twice a day while listening to the BBC News or the PBS News Hour. He subscribed to and read over a dozen nutrition and health journals in addition to many political and scientific ones. Ernest died peacefully at home surrounded by his loving family and 2 of his devoted caregivers.

He is survived by his sister, Gertrude Lessem of Rye, NY, two daughters, Helen Goldman Wright and her husband Jim of Middlebury, VT and Bobbie Goldman, of Wilmington, MA, two grandsons, David Goldman Wright of Washington DC, and Paul Robert Wright and his partner Elizabeth Vaughan of Somerville, MA, nieces, nephews, step-children and their respective descendants, and hundreds of adoring friends. He was also the brother of the late John Goldmann and Bill Graham, both of Melbourne, Australia.

Donations can be made in his name to:
Sounds of Stow
www.soundsofstow.com

Jewish Foundation for the Righteous
www.jfr.org

PHOTO'S OF ERNEST THROUGHOUT HIS 100 YEARS
http://youtu.be/T-fpdsWjiXs