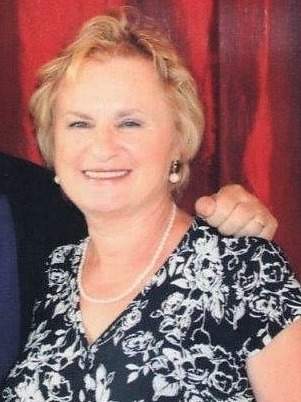 With great sadness, Edwina Josephine Roddy transitioned peacefully on August 25, 2022. "Wienie," as she was affectionately known, was born in Hartford, CT- on November 28, 1944, to Mary "Merola" D'Amico and Salvatore D'Amico. Edwina was number eleven, as she referred to it, in her family of thirteen. She grew up on 119 Adeline Street in New Haven, CT, with her large family. She had a backyard full of grapevines, chickens, and a vegetable garden that butted up to a nearby river. Her home had a revolving door of people coming and going. She has many stories from that three-bedroom home. With siblings sleeping three to a bed, who stole her hot bath water she was making for her bath before she got in it, to lots of humorous memories. She attended St. Anthony's Catholic School, where she was later married. She had quit high school to take care of her mom and help within the family. The family was very important to her parents, siblings, and herself.

She met her husband, John, at the age of fourteen, was married at eighteen and gave birth to her first child, John, in 1965 while residing in New Haven, CT. Her first job was as an engraver for special occasion notices in New Haven, CT. After that, she worked at a Silly Putty company with her two sisters in Branford, CT.  In 1970 her husband John took a job offer, and they purchased a home in Sudbury, MA 1970.  In 1972 she had her second child, Tracie, and raised her two children for twenty-four years at their Sudbury residence. There she was often referred to as "Eddie." Edwina and John were close to their neighbors and loved living in the neighborhood. However, they often took weekly trips to visit relatives in Connecticut so that her children would remain close to their grandparents, aunts, uncles, and cousins. Despite the two-and-a-half-hour drive, Edwina and John always made the trip up until June.

She was a long-time resident of Sudbury, Massachusetts. As a young mother, she entertained an endless number of guests. Her children's friends often visited her even if they weren't home. She was a house cleaner and a babysitter into her early 70s in Massachusetts. She took care of her two grandchildren their entire lives. Her daughter and son-in-law bought the family home in 1994, so the home was still their home even though they were residing in Leominster. She would often come to clean the house, feed the chickens, check on the garden, and leave food or treats for everyone. She was always thinking of others.

Edwina and John took walks daily, including a stop at their Dunkin Donuts to get a coffee each morning and afternoon. She loved food and any leftovers she would take for the birds and animals. With daily routines and rituals of stopping at specific places to scatter the pieces or toss them out the window because Edwina knew that was where animals could find them. She loved animals with great compassion, spreading peanut butter on trees in the woods to the many bird feeders she had at her different houses. She even carried around a big bag of dog treats even though she didn't have a dog anymore. She never missed any of her grandkids' sports events and was known for having a bag and cooler of snacks and treats, always offering some to the kids. She loved her family, especially her grandkids; they were her world and the topic of every conversation, even if it wasn't about them. She committed all her time to them. She was also known for remembering every occasion and ensuring we received cards for Valentine's Day, St. Patrick's Day, Easter, you name it. She was an exceptional person who immensely enjoyed making others happy, which made her happy.

Edwina was non-stop from morning to night, cleaning, tidying, weeding, gardening, and by the time she sat down to watch TV, she'd fall asleep. The radio was always on from the time she woke up until bed. Edwina was a rock and roll fan. She and John attended multiple concerts and venues, many of which she won on the radio through contests! She would tune into numerous stations at once, winning so much that the radio hosts would have to tell her she had to wait thirty days before winning again.

Wienie talked to everyone! She would stop and say hi to every animal, their owners, and children anywhere she went. She met many people and pets (remembering all the pets' names), which explains why she is remembered for her friendliness. Making lifelong friends in all the places she resided.

Wienie loved music and dancing with her husband, John. She loved cruising the seas with her sister Chickie and brother-in-law Kenny. For decades they vacationed together, previously vacationing in Ocean Park, Maine, every summer. She and her husband often made day trips to Gloucester for fried fish and a walk along the shore to feed the pigeons. Then, they would travel back to Ocean Park, Maine, for a day trip or stay a few days to enjoy the beach, not to swim but to bask in the sun and feed the seagulls.

Those left to cherish her memory are her husband and best friend of sixty-three years, John Roddy, her son John Roddy and daughter-in-law Sheila of New Hampshire, her daughter Tracie Ward and son-in-law Russell and her two grandchildren Mason Ward and Cole Ward, all of Sudbury, Mass. Her sister Louise Powers and husband Albert of Northford, CT, her sister Alice Knight (widow of George) of Newburg, NY, her sister Margaret "Chickie" Macdonald and husband Kenneth of East Haven, CT and her brother Salvatore D'Amico and wife Joan of East Haddam, CT. Her in-laws, Mary Ann D'Amico, Bonnie D'Amico, Ann D'Amico, Jeanette D'Amico, and numerous nieces and nephews.

Edwina was funny, full of life, and a spunky person with so much energy. She was an avid animal lover. Edwina had a contagious smile and laugh. She was always happy and willing to help anyone at any time. She never said no. Her relationship with God was very important and part of who she was. For many years she was a practicing catholic. With her journey through her religion, she evolved into becoming a Baptist. She always prayed and had great faith. Wienie will be remembered for her extreme kindness to family, friends, and strangers. One can say she was the kindest person you could ever know.

Family and friends will gather to honor and remember Edwina on Thursday, September 1, 2022 from 4:00 p.m. to 7:00 p.m. at the Fowler-Kennedy Funeral Home, 42 Concord Street, Maynard. Her funeral services will take place on Friday, September 2, 2022 at 11:00 a.m. at St. Anthony's Church, 70 Washington Ave., New Haven, CT. A burial will follow at All Saints Cemetery in North Haven, CT.  Reception to be determined.

In place of flowers, donations can be made to the Alzheimer's Association & Dementia at  https://www.alz.org/