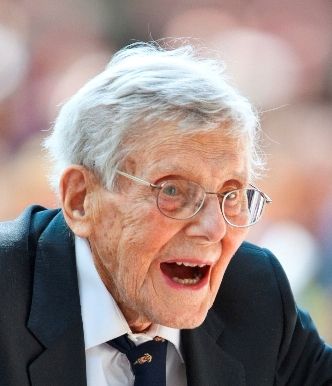 Archaeologist Donald Freeman Brown, 105, died at home in Stow, MA on Friday, February 21st, surrounded by family. Dr. Brown pioneered the core boring technique for surveying large archaeological sites, and discovered the location of Sybaris, a 6th century B.C. Greek colony in Southern Italy. He was a founding member of the Massachusetts Archaeological Society and Professor Emeritus of Anthropology at Boston University.

Born in Holyoke, Massachusetts on November 26, 1908, he was the son of inventor Wilford Chapman Brown of South Orange, NJ and Alma Louise Schuster of Brattleboro, VT. He received his A.B. from Harvard College in 1930, where he continued to work and study during the 30's. In 1939, he met his future wife, artist Linda Easton Smith, while on an archaeological dig in Sudbury, MA. Both their relationship and his studies were interrupted by WWII, where he fell in love with Italy while serving there in the Army. He and Linda were married in 1948 and established their home in the 1686 Minister's Manse in Stow. A year later, accompanied by his adventurous bride, he returned to Italy to research the Italian Neolithic for his Ph.D. thesis and search for the lost city of Sybaris. After extensive research, his creative core boring technique revealed the pottery of Sybaris, the first evidence and proof of existence of this lost Greek Colony. In 1952, and again in 1953, he won the Rome Prize, becoming a Fellow in Classical Studies and Archaeology at the American Academy in Rome. Upon returning to Harvard in 1955 he received his Ph.D. in Archaeology and assumed the position of Editor-in-Chief of the Council for Old World Archaeology. He was also Assistant Curator at Harvard University's Peabody Museum. Soon he was invited to Gordion, Turkey to use his core boring technique on an excavation of what was thought to be the tomb of King Midas (of "everything he touched turned to gold" fame.) In 1965 he left Harvard to accept a professorship at Boston University where he co-founded the Anthropology Department. He remained until his retirement in 1976. His was a magical career combining a deep love of history with the technological creativity to pioneer new techniques. He was also able to maintain an active mentorship with students over the years.

Dr. Brown had a lifelong passion for classical music and as a student, played the cello and sang in the Harvard Glee Club. His wife shared his love of music and this was passed down to their children who threw living room dance gatherings which filled the Stow house with everything from Strauss waltzes, to Benny Goodman swing, to rocking out with the Supremes. At age 70, he joined the Stow Chorus, singing with them for several decades. In 2008 he was awarded the Boston Post Cane for being the Town of Stow's oldest citizen and enjoyed attending Harvard University Commencements where he has been recognized as their oldest graduate.

He was predeceased by his wife, Linda, in 1986 and his only sibling Ralph in 1980, who had lived the majority of his life in Germany. He is survived by his six children, their spouses and children: Linda and Ed Engelmann of Bolton, MA, Alexandra Conover Bennett and Kermit Bennett of Elliotsville Township, ME, and Nicholas Brown of Flagstaff, and his daughters Jenny and Katie of Superior, AZ. The other three children all live in Stow: Dorcas and Edmund Sefton and their children: Ben, of Perth, Australia, Carolena, of Chicago, IL, and Eamon and Ronan; Christopher and Kristen Brown and daughter Annabelle; Alyson and John "JT" Toole.

Dr. Brown was a lively family man with an engaging personality who truly loved people. His many and cherished friends were all ages and from all walks of life. He was a lifelong canoeist, lover of the outdoors, teacher, philosopher, comic, superb listener, and in all, a man of moderation.

Donations in his memory may be made to:
The Stow Council on Aging
380 Great Road
Stow, MA 01775