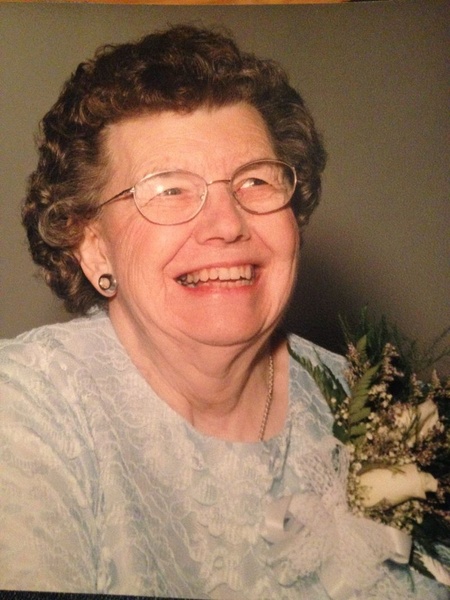 Clarissa E. (Van Wart) Potter age 91 of Stow passed away on Monday, November 17, 2014 at Life Care Center of Acton. She was the wife of the late Herbert S. Potter, Jr.

Born in Ware on November 22, 1922 she was the daughter of the late Lewis A. and Lillian (Layton) Van Wart.
Raised and educated in Ware she graduated from Ware high school in 1940. She worked as a secretary in the woolen mills after High School, before marrying and moving to Stow in 1944.

Clarissa was a devoted wife and mother, along with being a homemaker she worked for 37 years as an Asst. Assessor in the Town Assessors office in Stow and secretary to the Stow Cemetery Commission. She was also an active member of the Union Church of Stow where she enjoyed singing in the choir.
During her spare time and retirement Clarissa enjoyed needlework, crafts and most of all spending time with her loving family, especially her grandchildren and great-grandchildren.

Family and friends will gather for Clarissa's life celebration on Friday, Nov. 21 from 4:00-7:00 pm in the Fowler-Kennedy Funeral Home, 42 Concord St., Maynard. Her funeral service will be held on Saturday, at 2:00 pm in the Union Church of Stow, 317 Great Road, Stow. Interment in Aspen Grove Cemetery, Ware private.

Arrangements under the care of Matthew M. Farrow, FOWLER-KENNEDY FUNERAL HOME, A Life Celebration® Home, Maynard. To share a memory or offer a condolence visit: www.fowlerkennedyfuneralhome.com