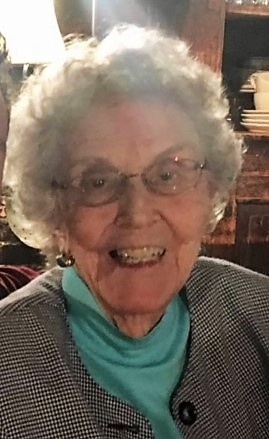 Claire “Peg” (Pritchard) Kennedy, in her 101st year, died Friday, June 24, 2022.  She was born in Lanesborough, MA, daughter of the late Richard and Janet (Richards) Pritchard.  After High School, she trained as a secretary and worked in that capacity for many years.  She married John A. Kennedy in 1940 and accompanied him to the western part of the country when he served in the US Army during WWII.

After the war, while her husband was training in funeral service, she gave birth to two daughters: Janet H. (Kennedy) Erb and Martha J. (Kennedy) Maria.  After they purchased the Merrill Funeral Home in Hudson and later the Fowler Funeral Home in Maynard, she worked as secretary to the businesses and assisted the business in several capacities.

In her spare time, she joined a Maynard Dramatics group, volunteered at church fairs, and enjoyed hand work knitting, cross-stitching needle point and rug making.  Later in life, she delivered meals on wheels using her blue convertible, into her early nineties.

Mrs. Kennedy raised her family in Maynard and moved to Stow in 1974 to the home where she and her husband hosted many family gatherings and enjoyed her six grandchildren and six great-grandchildren.  Her beloved husband died in 1997.

On the occasion of her 100th birthday the town of Stow recognized her as the oldest resident, presenting her with the Boston Post Cane and proclamations from the town and the House of Representatives.

She leaves her two daughters, both in Maynard, her six grandchildren, Carl Maria and wife Audra, Laura Maria, Jen Adams and husband Jim, Jay Erb and wife Laura, Amy Maria and Josh Erb and six great-grandchildren, Alex, Juliana, Bella, Nicholas, Shaylyn and Sam, to whom she was known as “Riggy”, her son-in-law, John E. Erb, her daughter’s partner Victor Kizik and her former son-in-law, Martin Maria.  She was predeceased in death by her husband and three sisters.

Private funeral services will be held at the Fowler-Kennedy Funeral Home, 42 Concord Street, Maynard.  Friends may call at the funeral home from 6:00 – 8:00 p.m. on Friday, July 1st.

Those who wish, may make donations in her memory to the Stow Council-on-aging or the Maynard Council on aging.