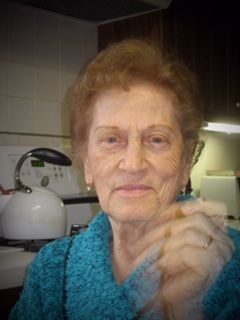 Antoinette "Anne" (Santostefano) D'Amico, age 100, Maynard resident of 16 years, passed away peacefully on Tuesday, August 25, 2020. She was the loving wife of the late Salvatore "Sal" D'Amico. Both of their families had come to the United States from Castel do Sangro, a small city in the Abruzzo region of Italy, east of Rome.

Born in Jersey City, New Jersey, on May 27, 1920, she was the daughter of Gaetano and Maria Santostefano. Anne and her three brothers were raised in Union City, New Jersey. Anne left high school before graduating to take a job to help support her family in the time of the Great Depression. She later was a seamstress for the women's fashion house Evan-Picone.

Antoinette and Salvatore married in June 1939. They raised two children, Jean and Louis, who were the first in the extended family to go on to college. Family was important to Anne. She was a devoted mother to her children and a loving grandmother to her daughter's children, Rachel and Daniel. She enjoyed cooking Italian meals for family and friends. While living in Union City, she would take the bus to New York to see the latest Broadway plays and musicals. In the early 1980s, when her daughter's family was living in mid-town Manhattan, she traveled by bus and subway to help care for her grandchildren.

Anne moved to an apartment on Nason Street in 2004, after the death of her husband. She often spoke of living here as her "third life," the period after first growing up with her parents, and then her 64 years of marriage to Sal. She said that Massachusetts had always been one her favorite states, and was glad that she could be here to be close to her daughter and son-in-law. She enjoyed walking around Maynard from her arrival as a "young 84", well into her 90s. She would stop at a café for coffee and a pastry, and chat with acquaintances. As a lifelong avid reader, she enjoyed living so close to Maynard's library. An although no longer a gardener, she was a member of Maynard Community Gardeners, and supported its town beautification efforts.

Anne is survived by her daughter, Jean E. D'Amico and husband David A. Mark, of Maynard, MA; and her granddaughter Rachel A. D'Amico Mark, of Altadena, CA. Anne was predeceased by her husband, her brothers Arthur, Guido and Rudolph, her son Louis D'Amico, and her grandson, Daniel A. Mark.

Anne was buried with her husband, in Holy Name Cemetery North Arlington, NJ, on September 2, 2020. In this time of pandemic, a fitting celebration of her life will be held for family, friends and acquaintances at a later time.

In Lieu of Flowers, gifts in her memory may be made to Citizens United for Research in Epilepsy (CURE) – the leading nongovernmental agency fully committed to funding research in epilepsy – in memory of Daniel Mark, her grandson. https://www.cureepilepsy.org/