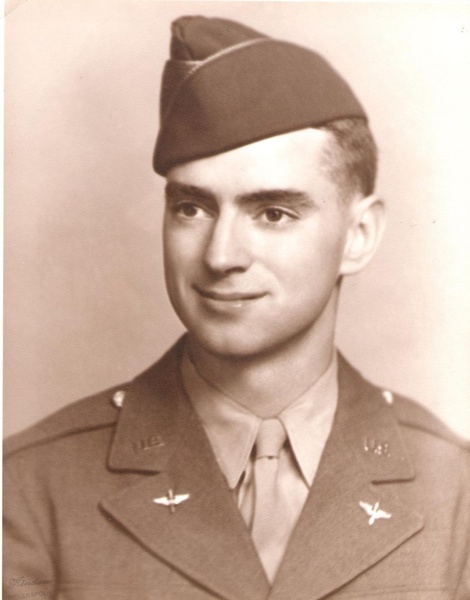 Allan C. Johnson, 98, of Berlin, Mass., a Purple Heart veteran of World War II and the liberation of Auschwitz, passed away June 9, 2020, at home in his sleep.

Allan was born November 6, 1921, in Clinton, the son of Dr. Allan C. and Mary Alice (Hager) Johnson, Sr. Allan grew up in Hudson, graduating from Hudson High School in 1940. Slight in build yet strong in spirit, he was a member of the HHS cheerleading squad an era when that was a co-ed activity. In 1942, he completed the program in horticulture at Stockbridge School of Agriculture, University of Massachusetts.

In 1943, he was commissioned as a lieutenant in the U.S. Army Air Corps. Allan earned 23 mission credits as a bombardier on a B-24 Liberator based in Foggia, Italy. On December 26, 1944, flying in a lead position in the Allied bombing raid of Oswiecim, Poland, his plane was hit by Nazi gunners, crash landing soon after in Hungary. The only officer to survive the crash, he was extricated from the crash site by three gunners who also survived. He spent three months recuperating from injuries sustained in the crash as the only English-speaker in a Russian military hospital. This Allied mission significantly degraded Nazi capabilities at Oswiecim, paving the way for the final liberation of Auschwitz a month later by the Red Army. Allan received six battle stars, the Air Medal with Oak Leaf Cluster, and Purple Heart Medal.

After the war, Allan worked in the floriculture industry and lived on the Hager family homestead in Boxborough. In 1950, he married H. Katherine Williams of Wakefield. After residing for a period in West Acton, Allan and Kay bought property on Central Street in Hudson and established Johnson's Greenhouses, which they built from the ground up and operated for over 25 years. In retirement, Allan and Kay traveled extensively in the U.S. and Canada. They moved to Meadowbrook Village, Berlin in 1999.

Allan served for many years as a director and officer of Avidia Bank/Hudson Savings Bank, and as a trustee of the Hudson United Methodist Church, lending his steady approach to prudent financial management to both. In all he did in business, in the community, and in his family, Allan was reliable, even-tempered, and considerate of the needs of others.

The family wishes to extend its thanks to the outstanding professionals of Reliant Medical Group, St. Vincent's Hospital, and Salmon Hospice Care as well as Allan's personal caregivers, Ruby, Agatha, and Genevieve. Interment in Boxborough with military honors will be at the convenience of the family. Arrangements by Fowler-Kennedy Funeral Services of Maynard.

As a career flower grower, Allan's credo was 'say it with flowers.' Cemetery pans provided by Johnson's Greenhouses decorated the graves of countless Hudson-area servicemen for many years. Nonetheless, in lieu of flowers, memorial donations may be made to Hudson Community Food Pantry, 28 Houghton St., Hudson, MA 01749.